Thank you for the opportunity to make a submission in regards to the Treasury Laws Amendment (Putting Members’ Interests First) Bill 2019.

This submission will deal with exemptions for dangerous occupations, the start date for the proposed changes, and other matters.

Many previous submissions on these proposed measures have raised the issue of high risk or dangerous occupations, with some recommending keeping insurance in super as opt-out for people in these occupations.

In November 2018, then-Assistant Treasurer Stuart Robert said in a speech that:

“While the Senate Committee recommended the Bill be passed without amendment, the Government has heard from stakeholders that workers in dangerous occupations are likely to benefit from default insurance in superannuation, as they may face barriers to accessing insurance elsewhere.”

“Therefore, the Government has decided to make available an exception to the opt-in changes for new members in prescribed dangerous occupations, such as police officers, truck drivers, farmers or concreters, who are under 25 years old or have an active low balance account, where trustees elect to apply it.”

The Coalition then proposed amendments to the Treasury Laws Amendment (Protecting Your Superannuation Package) Bill 2018 including a “dangerous occupation exception to insurance rules” (sheet QM101). Though, as the underlying measures were removed from the Bill, this amendment was moot.

However, such an exemption does not appear in the new Bill. Given the Government has accepted the benefit of retaining opt-out insurance for some members these amendments should be incorporated into the Bill, or an explanation made for this change in policy.

Pushing back start date of 1 October 2019

While not speaking for large superannuation funds, I think consideration should be given to pushing back the start date of the measures to allow more time to prepare for the changes.

The version of the Treasury Laws Amendment (Putting Members’ Interests First) Bill 2019 introduced to the Parliament in February 2019 (and lapsing at dissolution) included a delay to the start date, as originally proposed, from 1 July 2019 to 1 October 2019. As Assistant Treasurer Stuart Robert said in the second reading speech at the time:

“The government has delayed the start date of these elements by three months from the announced commencement of the package to provide additional time for funds to take action and notify members prior to the changes taking affect from 1 October.”

At that time it was over seven months until the changes were intended to apply. Whereas with the current Bill it is only around three months.

If it remains policy to implement the Financial System Inquiry recommendation of, seeking broad political agreement for, putting objectives for the superannuation system in legislation, then this should be proceeded with ahead of changes to superannuation to which such objectives would apply.

I note that the February 2019 version of the Treasury Laws Amendment (Putting Members’ Interests First) Bill 2019 – which lapsed – included contingent amendments relating to increasing the maximum number of SMSF members from four to six.

As increasing the SMSF member cap was a policy taken to the election, I trust this is simply a matter of legislative drafting and not reflective of a change in policy.

I understand this was likely necessary given the proposed start dates in the Bill, and that the measures have previously been subject to an inquiry. However, I hope that such changes of dates are not necessary with similar inquiries in the future, as it could cause inconvenience for interested parties, and that instead sufficient time is allowed both for inquiries and the making of submissions.

My submissions to inquiries, reviews and consultations. 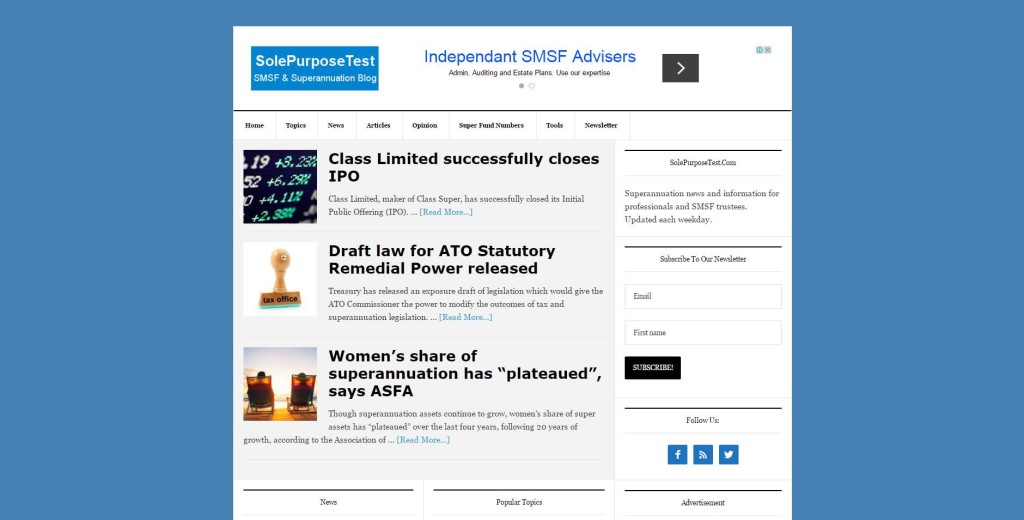